How you can help introverts flourish in the classroom 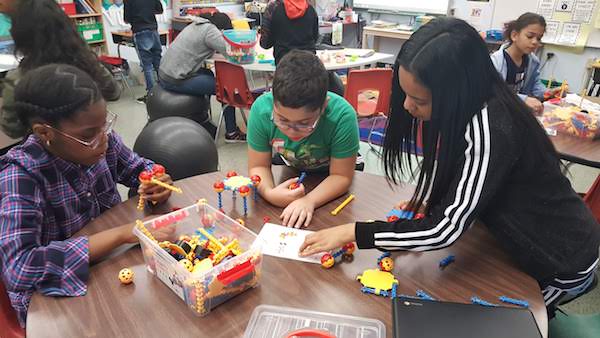 Building confidence—Fourth-graders work on a project together at the Nellie K. Parker School in New Jersey. Introverted students can thrive in group activities as long as teachers find ways to ensure everyone’s voice is heard.

Yes, introverts tend to speak out less in class and during group work, but that doesn’t necessarily mean they’re shy or less likely to make a valuable contribution.

The key difference lies in what energizes introverts and extroverts, says Chrissy Romano, a fourth-grade teacher in New Jersey and author of Quiet Kids Count: Unleashing the True Potential of Introverts (Times 10 Publications, 2019).

“When they are around people all the time and when they go to a party and there’s a lot of action, extroverts are energized,” says Romano, a self-described introvert who presents at large education conferences. “Introverts won’t mind going to the same party, but after an hour or an hour and a half, that kind of stimulation will drain their batteries.”

This, of course, has implications for how educators support their classroom introverts, who often earn good grades, follow directions and prepare well, but don’t seek attention, she says.

In her classroom, she has small and large tables, stools, beanbags, and old-fashioned desks, among other furniture. She also structures group work so students can begin planning individually, which gives introverts quiet time to gather their thoughts. When students come together, they receive chips to hand in when they propose ideas to their groups. “When the extroverts use all of their chips, they can’t talk anymore,” she says. “That means the introverts don’t have to fight for the spotlight. They know they will get a chance to share.”

Romano also has her introverts take notes to other teachers so they can go on short, reenergizing walks. Without a break from the classroom, introverts may resort to asking to go for a drink or to use the bathroom more frequently. “A lot of times, teachers see that as kids trying to escape, but that’s the wrong reason,” she says.

Getting introverts to speak out and make friends

Understanding the differences between extroverts and introverts should become a regular part of teachers’ professional development, says Susan Cain, author of Quiet: The Power of Introverts in a World That Can’t Stop Talking (Broadway Books, 2013).

“From eight in the morning until the middle of the afternoon, introverted kids are in an environment with lots of other people and a million different  things going on, and they have to be ‘on’ the whole time,” says Cain. “They’re already operating with a cognitive load.”

Teachers, for instance, can use the “think-pair-share” method to lead class discussions. When posing questions, teachers should give students time to think about answers by themselves, then have them pair up to discuss their ideas, and finally have partners share with the entire class.

“More reticent students are more likely to speak because they’ve already tested their ideas in a safe space,” she says.

Teachers should also connect with parents to help young introverts make friends. “Teachers can find out which child a kid is interested in getting to know, and look for ways to pair those two students in a one-on-one setting where a friendship has a chance of forming,” she says. “That can become a bridge for a quieter kid to get to know other children.”

You may be used to seeing your calendar punctuated by the various holidays that occur throughout the year. But on one New Jersey school district's calendar, each one of these days will be listed, simply, as "day off."

With social media and connective technology, news is communicated instantaneously and millions are a few keystrokes from the megaphones of Twitter, Instagram, Facebook and Snapchat. Anytime, anywhere connections mean teachers […]

Lawmakers are considering a bill that would allow high school seniors to graduate before the end of the school year in certain circumstances. Graduation dates would be unaffected by things like snow days, even if it means seniors don’t complete the 180 day school year requirements. It should also cut down on the cost of graduation.