Classrooms contend with heat, even in October 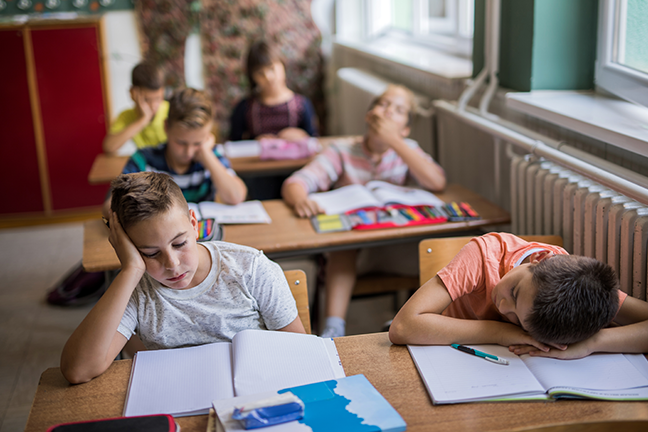 As more schools grapple with hotter temperatures—which have been shown to hamper learning—district leaders and state officials are finding ways to fund the installation of air conditioning. (gettyimages.com: skynesher)

As schools start to decorate for Halloween and other fall festivities, students and teachers are coping with summertime heat in parts of the country where warmth isn’t typically an issue this time of year.

On Monday and Tuesday, as September gave way to October, districts in parts of Ohio dismissed students early due to temperatures that hit the low 90s, according to the Bellefontaine Examiner and other news outlets. Heat also drove Baltimore County Public Schools in Maryland to close schools building without air conditioning on Wednesday, Oct. 2, local news outlets reported.

Unseasonable warmth, coupled with a lack of air conditioning, has caused classroom complaints as far north as Boston this fall, the Boston Herald reports.

The government of Hawaii, meanwhile, continues to a support a program that would speed the installation of air conditioning in classrooms across the state, Hawaii News Now reports.

The website also reports that, according to the state’s Department of Education, about 6,200 of Hawaii’s 11,000 classrooms have air conditioning.

Studies have shown that heat can suppress learning. Researchers have found that a 1-degree Fahrenheit increase in average school-year temperature resulted in a 1% decline in learning in schools without air conditioning, according to a study published by the American Economic Association.

Heat also has a greater impact on some groups of students, one of the study’s authors told PBS News Hour.

“The causal effect of any given 90-degree day was much larger for lower-income students and racial minorities,” UCLA economist R. Jisung Park told PBS News Hour. “And we know that those types of students are more likely to live in the South or in hotter parts of the country.”

More from DA: How school buildings are getting smarter

Over past two summers, new air conditioning has been installed in 15 buildings in Ohio’s Columbus City Schools. The work, part of the district’s Operation Fix It campaign, is funded by a bond approved by voters in 2016.

“Students aren’t sweating and slumped over and exhausted from the heat,” says Nikki Myers, principal of Columbus’ Salem Elementary School, which got air conditioning and a new roof this summer. “It’s a wonderful upgrade that has definitely helped the learning environment.” New air conditioning systems can play an aesthetic role in a building’s design, such as at this school in Texas’ Spring ISD.

Myers told DA that students are more attentive, and fewer children have had to go to the nurse’s office to use inhalers. Also, students with sensory issues appear to be more comfortable so far this school year because their clothes aren’t so sticky. The district will be reviewing data to see if cooler classrooms result in higher student achievement.

“Our staff is much happier, too,” Myers says. “Some teachers would have to bring a change of clothes and change at lunchtime because they would just be so hot and uncomfortable.”

More from DA: How net-zero energy schools can turn a profit

How to reimagine testing in post-COVID education

To stem "COVID slide" learning loss, new policies are needed to boost testing equity and to adapt assessments to online and hybrid learning, according to NWEA.

4 things to keep in mind while spending stimulus on PPE

With the prospect of a fully vaccinated student body still a year away, PPE will continue to play a major role as district leaders plan for more in-person learning.